When the Spurs Score | Spurs Contrarian NBA Team of 2016

What happens when the Spurs score a point in NBA? I was asking myself this the other day when thinking about my NBA season. Do their points count for more than other teams? Are the San Antonio Spurs playing differently than the rest of the league? Of course they are. How does this phenomenon reflect the score of our betting season?

2-1 ATS yesterday. I’d like to get at least 15 units for the season with these official newsletter picks. The NBA raw numbers have excelled and I’m never sure how much more you can ask from them, but this appears to be their season. 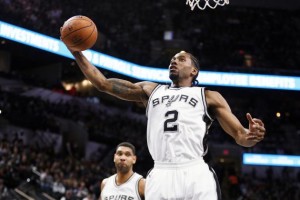 I’ve always preached the idea that the best bets are the ones that stink…the ones that you have a difficult time stomaching. For me personally, that is just basketball in general. I’ve always had a much better grasp on Football and MLB and felt that there is much more of a random factor in hoops. Perhaps it is the direction basketball is moving in now. You have people arguing that the three point shooting is taking away from the traditional quality of the game

….and yet, with all of the NBA teams trying to quicken pace which team (other than the Warriors is doing the best? The Spurs! And what do the Spurs do? I love what the Spurs do, they pace and manage and play old style. They’re sticking to their guns and NOT going where the rest of the league is going. When the Spurs score, it means something bigger.

This sort of diversity amongst teams though and their playing styles has certainly made the NBA much less of a big pile of MEH for me. I guess, as much as I hate to admit it, perhaps when I AM a fan and know the sport well as a fan, I do actually do better capping it….a statement which boldly goes against a theory I’ve had for many many years: That is, the less of a fan of the sport you are, the better a capper of it you’ll be. Taking those gut twisting value bets won’t be as difficult is the big reason there. Also, overreaction to key player injuries in a big pitfall you won’t get into as much.
I could waffle on more but here are some trends….

When the Spurs Score:

The points count for more…

So next time you hear someone talking about how the league has changed and that the pace has quickened and the sport isn’t what it was: inform them or remember that there isn’t much of a correlation between high powered offense and team record (excluding the Warriors who are, beyond a doubt, an absolute anomaly).

Please disable or whitelist procomputergambler.net from your adblocker to ensure that raw numbers work properly! Thank you!